You are using an outdated browser. Please upgrade your browser to improve your experience.

UK Hydrogen Strategy: What Does It Mean?

Over the next few years, the prevalence of low-carbon heating technologies will rise significantly, bringing big changes in how the UK’s buildings are heated. Hydrogen is one of the key energy sources forming part of this conversation.

The UK Hydrogen Strategy gives clear direction on the Government’s commitment to the role this low carbon fuel source can play in meeting its target of becoming net zero by 2050 and builds on ambitions previously outlined in the Government’s 10-Point Plan and Energy White Paper. However, it highlights the uncertainty remaining on the scale and demand we can expect to see in the future, with hydrogen expected to form between 20-35% of the UK's energy consumption by 2050 and no final decision on the role of hydrogen in buildings until 2026 after the hydrogen village trial in 2025.

The immediate focus is on growing the infrastructure and capability to generate, store and distribute hydrogen, whilst in parallel creating and increasing the demand for hydrogen itself. Two key initiatives coming out of the strategy to support those researching, producing and utilising hydrogen are the £240m Net Zero Hydrogen Fund to provide co-investment for new production capacity and the Hydrogen Business Model encouraging producers with revenue support levelling up cost of hydrogen against existing fuels in the short term.

Hydrogen is seen as a key technology in facilitating the UK’s pathway to achieving its net zero goal. It offers several benefits which give it great potential as we transition to a low carbon economy.

The need for investment

There are still many challenges in delivering hydrogen so investment in production capacity and interventions that targeting support and regulation across the wider value chain is required.

A potential barrier to the implementation of hydrogen is cost, as it is currently unknown how this will compare to natural gas. UK regulator Ofgem laid out its role in supporting the development of a low carbon hydrogen economy to the Government and experts are confident that costs will improve in the coming years.

However, with green hydrogen requiring electricity for production, and electricity costs currently three times higher than natural gas, it is clear why the hydrogen business model is needed to be reviewed and managed for hydrogen to become a significant fuel source of the net zero energy market.

Increasing demand across all sectors of the economy

By 2030, hydrogen will start to play an important role in decarbonising many sectors, with the Governments ambition of 5GW low carbon capacity by 2030 and the decarbonisation of existing hydrogen production. Sectors that can benefit include polluting and energy-intensive industries like chemicals and oil refineries, heavy and long-distance transport, such as shipping, HGV lorries and trains, and provides flexibility to power generation, helping all these sectors move away from fossil fuels.

Hydrogen is likely to be fundamental to achieving net zero in the wider transport industry and industrial sectors and are crucial early markets for hydrogen by 2030. There is a range of funding available for fuel switching to hydrogen, a £315 million industrial energy transformation fund and a call for evidence on hydrogen-ready industrial equipment to be launched later this year.

What it means for heating 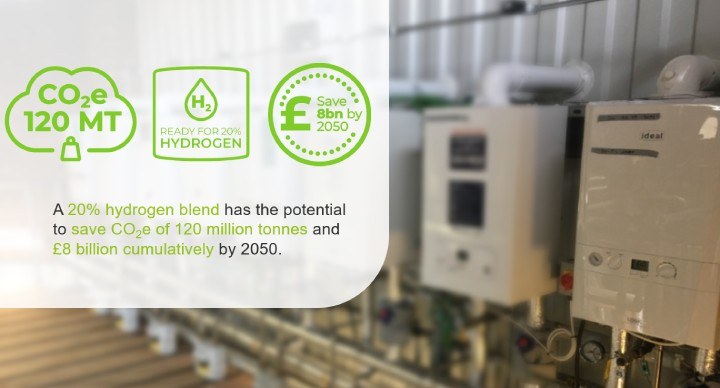 The Government plan to consult later this year on the case for enabling, or requiring, new natural gas boilers to be easily convertible to hydrogen, i.e., ‘hydrogen-ready’ by 2026. The consultation will also look more widely at heating to look for best ways to continue to reduce emissions from gas heating systems over the next decade.

Our priority is to continue providing boilers that are safe and highly efficient to meet our customers’ needs. Currently, this means our boilers can operate safely on 20% hydrogen-blended gas in trials and will be approved as and when the standards change in 2023, another stepping-stone towards a low carbon future.

We remain committed to our founding principles of quality, innovation, and value building – and this means we’ll continue to provide unrivalled support to our customers in selecting the best heating solution for their project, now and in the future.